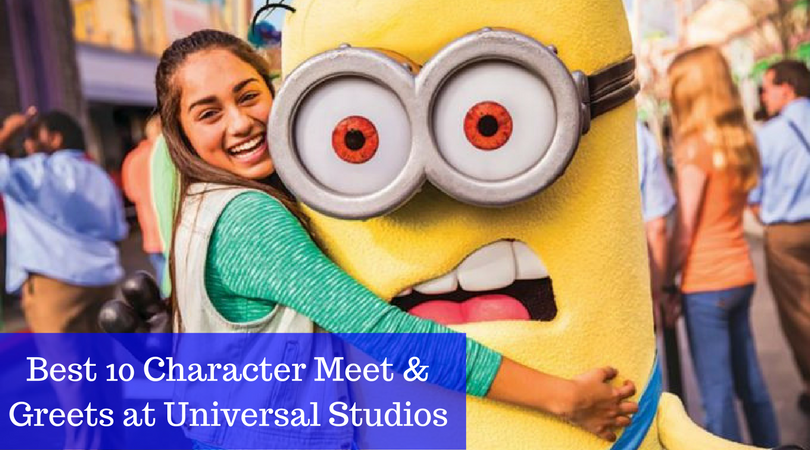 The Universal Orlando Resort is filled with lots of fun opportunities to venture into new lands and meet unique and sometimes strange characters. You’ll spy everyone from Hello Kitty and SpongeBob SquarePants to Marilyn Monroe and Lucille Ball.

Here’s our list of the top 10 characters to meet at the Universal Studios parks:

Meet the lovable Minions from the Despicable Me films outside of their 3D ride at Universal Studios Florida, Minion Mayhem. Sometimes they’re even joined by Gru and his daughters. If you don’t see them outside, you can always catch them at the Minions dance party by the ride’s exit.

After saving the world, the freedom fighters in your family can meet Optimus Prime, Bumblebee and maybe even the evil Megatron next door to Transformers: The Ride-3D. Have your picture taken with Optimus Prime, the leader of the Autobots. Bumblebee is unique as he can only communicate through music clips, which makes him a whole lot of fun to dance with. Be warned though – the intimidating Megatron has been known to mock guests for taking a selfie.

Just outside of The Wizarding World of Harry Potter: Diagon Alley, you can have a lively conversation with the Knight Bus conductor and his hilarious friend the talkative shrunken head. The Knight Bus is used for emergency transport of stranded wizards, but they’re parked in London to meet with muggles near the Eros Fountain.
Fun fact: This is one of two actual prop buses that were used during the filming of the Harry Potter films!

Check out Universal’s Islands of Adventure near the lagoon at the front of the park to meet the Dragon Warrior of legend himself, Po the Kung Fu Panda. This happy (and huge) panda has stepped away from his home in the Valley of Peace to meet all his fans at Universal Orlando. He’s always up for a big hug, high five and taking a photo. If you ask, he’ll even show you how to perform the Wuxi Finger Hold.

Step into the land of Far Far Away at Universal Studios Florida to meet Shrek the ogre and his noble steed, Donkey. It’s never a dull moment when you’re spending time with Donkey. He is a riot and is not afraid to crack a joke at anyone’s expense.

After surviving the daring drop on Jurassic Park River Adventure, take a walk on the wild side and come face to face with a ferocious Velociraptor. This apex predator is nearly nine feet tall and may appear curious and even playful, but don’t be fooled.

Meet everyone’s favorite TV family including Homer, Marge, Lisa and Bart at Universal Studios. They can usually be found near their run-down RV in the Hollywood section of the park to sign autographs and take photos. But if you go to the Springfield USA area, near The Simpsons Ride, you might be able to catch other popular characters like Sideshow Bob and Krusty the Clown.

You never know where – or when – Doc Brown will show up at Universal Studios, but when he does, he usually arrives in his iconic DeLorean time machine. The Doc has traveled all the way Back to the Future to meet with fans of his inventions and to talk about time travel. Just don’t ask him anything too “heavy” or it could mess with the space time continuum.

Venture deep into The Lost Continent at Islands of Adventure and you may come across The Mystic Fountain. Don’t be fooled – this fountain was carved from magical stone and can speak to (and splash) anyone that approaches. Ask the feisty fountain a question and you may get a silly response. Toss in a coin to make a wish, and you could just get squirted with water.

Hang out in the Hollywood section of Universal Studios for the opportunity to meet Scooby-Doo, Shaggy and the gang of Mystery, Inc. Having a Scooby Snack or two with you might help too. Just follow the Mystery Machine when you see it driving by and you can get your picture taken with these famous sleuths. Be careful discussing cheeseburgers around Scooby and Shaggy though, because it’s their favorite food and they’re always hungry.
Best CharactersCharacter Meet & GreetCharactersPhotoUniversal Orlandouniversal studios